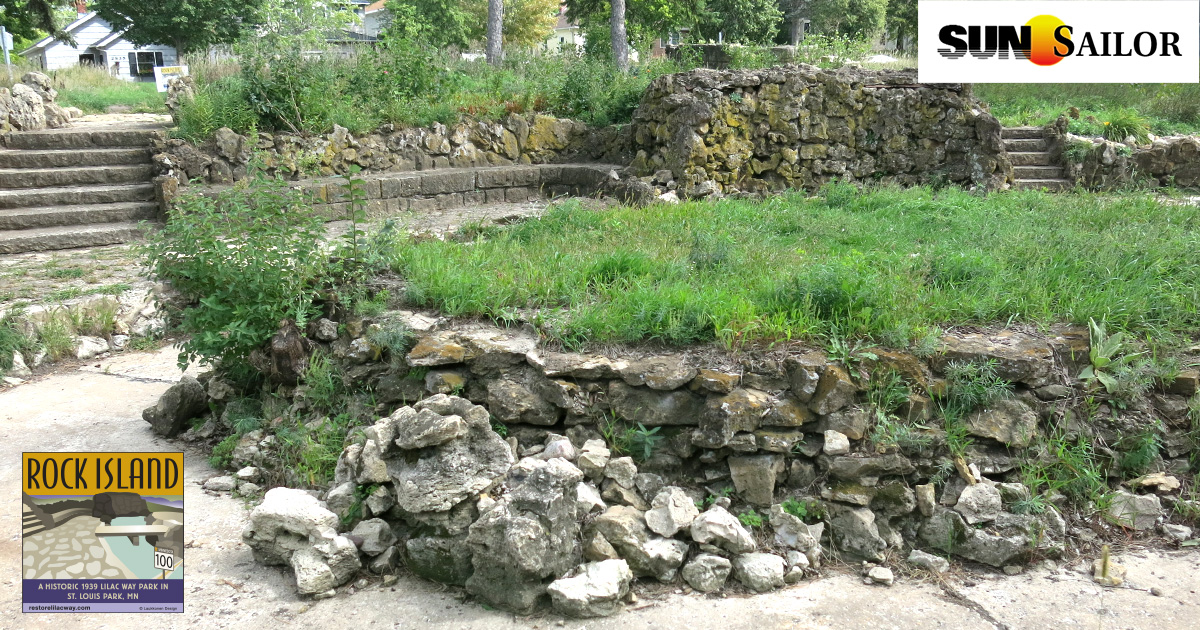 Click button below to read on their website, or scroll down to read the article content. Links in article were added by Restore Lilac Way, and were not in original article.

Sometimes a valuable asset is hiding in plain sight.

That’s the case with St. Louis Park’s surviving 1939 Rock Island Park along Highway 100 and Minnetonka Blvd – an historic wayside rest hidden behind a 20-foot sound barrier. The park is already an urban oasis. Its stone features include a pond, island, bench, two staircases and pathways.

But following major improvements and widening through the years, the highway’s famous Lilac Way, with its treasured beehive fireplaces and sturdy stone benches and tables, lost some of its important pieces. As a result, the 1930s Works Progress Administration (WPA) parks are no longer a welcome stopping-off points for weary travelers, as in our grandparents’ day.

Today, Rock Island survives as a valued neighborhood green space. But for how long?

A few months ago, “Say Yes to Rock Island Park!” signs sprouted up in the city, urging St. Louis Park to acquire both parcels of the historic park land for public use only, and not for housing development. The Minnesota Department of Transportation unexpectedly indicated the city could submit a letter of interest to acquire the green space in two parcels – without defining the proposed use of the land as public or private development.

Since then, dozens of ardent supporters have signed online petitions and posted photos of support – small children to retirees, from Toledo Avenue, 28th Street and beyond – hoping to save history from the bulldozer.

“Of the seven original lilac parks, Rock Island is one of only three park sections remaining today, and one of only two rock gardens in Minnesota,” said St. Louis Park resident Karen Laukkonen, creator of restorelilacway.com. “It is a sister park to the restored Lilac Park near Nordic Ware, which features the beehive fireplace, originally located just south of Rock Island.”

After viewing a public broadcasting documentary in 2007 on the early days of Highway 100 and the development of Lilac Way – a 12-mile “showcase” lined with parks and 7,000 spring-blossoming bushes through the western Minneapolis suburbs – she was inspired to launch her vast online archive.

Laukkonen has donated her expenses and countless hours to creating a presence for “all things Lilac Way.” Her efforts have produced a mind-boggling array of historical and educational data, especially promoting the preservation of Rock Island, appreciation for Lilac Way and the restoration of Graeser Park in Robbinsdale. It also provides news updates and a video playlist.

And much of the credit for the resurgent interest in Lilac Way is due to Laukkonen’s tireless efforts. Her professional website content includes more than 85 pages, 85 photo albums and 45 blog articles!

Saved from demolition during road reconstruction, the park, so named because of its unique “rock island,” was the north end of the 5-acre Lilac Park near Minnetonka Boulevard; the south end was lost to road improvements. Thankfully, a beehive and picnic table were saved and moved to the new Lilac Park location near Highways 7 and 100.

Volunteers have demonstrated that they are up to the task of helping to restore it to its “original grandeur,” as one supporter said. With MnDOT’s help in culling out invasive buckthorn, the planted lilacs and prairie grasses are developing. I hope they are successful because once historic urban green spaces are lost, their original value is lost forever. And even partial development would diminish what remains. Redevelopment makes more sense when it replaces existing structures, as in the case of the housing units to be built two blocks west of Rock Island Park on Minnetonka Boulevard.

The history of Highway 100’s (Beltline) development and construction is linked, in a remarkable way, to the addition of the lilac parks centered in the Park, Golden Valley and Robbinsdale. Arthur Nichols, the preeminent landscape architect of his day, designed the highway’s seven beautiful parks in the 1930s, along with landscapes at Lakewood Cemetery in Minneapolis, Duluth’s Glensheen Mansion and the University of Minnesota’s Northrop Mall. Nearly 3,000 jobless Minnesotans in 1935 alone contributed to building – by hand – the massive WPA project through the Park.

When outsiders put value on what we have, maybe we should, too.