“I remember the original Lilac Park near Minnetonka Boulevard. We used to go there for family picnics in the late 1950s/early 1960s with our grandparents who lived in St. Louis Park on 33rd and Xenwood. We called it Monkey Park. (The nickname comes from Como Park’s ‘Monkey Island’, which was also built by the WPA.) Now it’s called Rock Island.

I was very young, but I remember thinking that it was such a cool place! We climbed around the rock gardens which were already starting to become overgrown and were crumbling, even by then.

I remember asking my dad why there wasn’t water in them anymore. I don’t remember what his answer was. I remember the picnic tables, of course – we used them! I also definitely remember the beehive fireplace. I was enthralled by it.

When I got older, I’d always look to see what was left of the place just about every time I passed that way. I stopped and walked around once in the 1970s. Everything was very overgrown by then if I remember right.

I don’t remember ever grilling in the beehive fireplace. The picnics were actual picnic basket affairs, with pre-made sandwiches and other picnic treats packed in a picnic basket. My two older sisters were at the picnics, too. There may also have been cousins there on a few occasions.

I believe I was a bit jealous of my sisters because being older, they got a more free run of the place. I got to climb and play, but only if mom, dad or one of my grandparents was right there with me.

My little brother might have been with us later on, but he wasn’t born until 1963 so he would have been really, really young. I know that for some reason, the picnics stopped at some point in the early 1960s. Possibly because of my grandma becoming too frail.

I have a crazy lot of memories seeing that 1953 aerial photo of Highway 100 cloverleaf at Highway 7! (Scroll to see photo below.)

I see the Skippy Peanut Butter factory where those elevators are on the left. It might not have been Skippy at that point, but that’s all I remember it as when I was a kid.

I also see the tower that now says Nordic Ware on it in the lower center. (Note: The Peavey–Haglin Experimental Concrete Grain Elevator is the world’s first known cylindrical concrete grain elevator, built from 1899 to 1900.) I think it might have been a lumber place back then. Part of the railroad tracks behind it are a rail trail now that goes right by the new and restored Lilac Park. Funny that we never went to this park when I was a kid. We always went to the original Lilac Park on Minnetonka Boulevard.

Above the top two cloverleafs I see the little bitty Webster Park on Webster Avenue that we played in as kids. It has a full playground now – all it had then was a couple of merry-go-rounds, a normal sized one and a gawd awful two-person one that I hated. There might have been a jungle gym and/or swings, but I don’t remember for sure. It was always kind of swampy down there.

Above the top right cloverleaf is the turnout from Highway 7 to Webster that they took out at some point in the 1960s. That’s where we turned to go to grandma’s house until they took it out. Dad was livid. After that, we’d get off Highway 100 at Minnetonka Blvd and backtrack to grandma’s on Xenwood.

I see Xenwood Avenue and the double bungalow a couple of houses from grandma’s house that my parents rented before I was born. In 1953 when this pic was taken, they might have still been living there, or they may have already moved to their brand new house in Richfield.

I see my grandma’s house, too, on the corner of 33rd and Xenwood. I can barely make out the alley that went by grandpa’s tulip garden in their side yard, but didn’t go all the way through, probably because 34th had gotten cut off by Highway 7. It always perplexed me as a kid.” 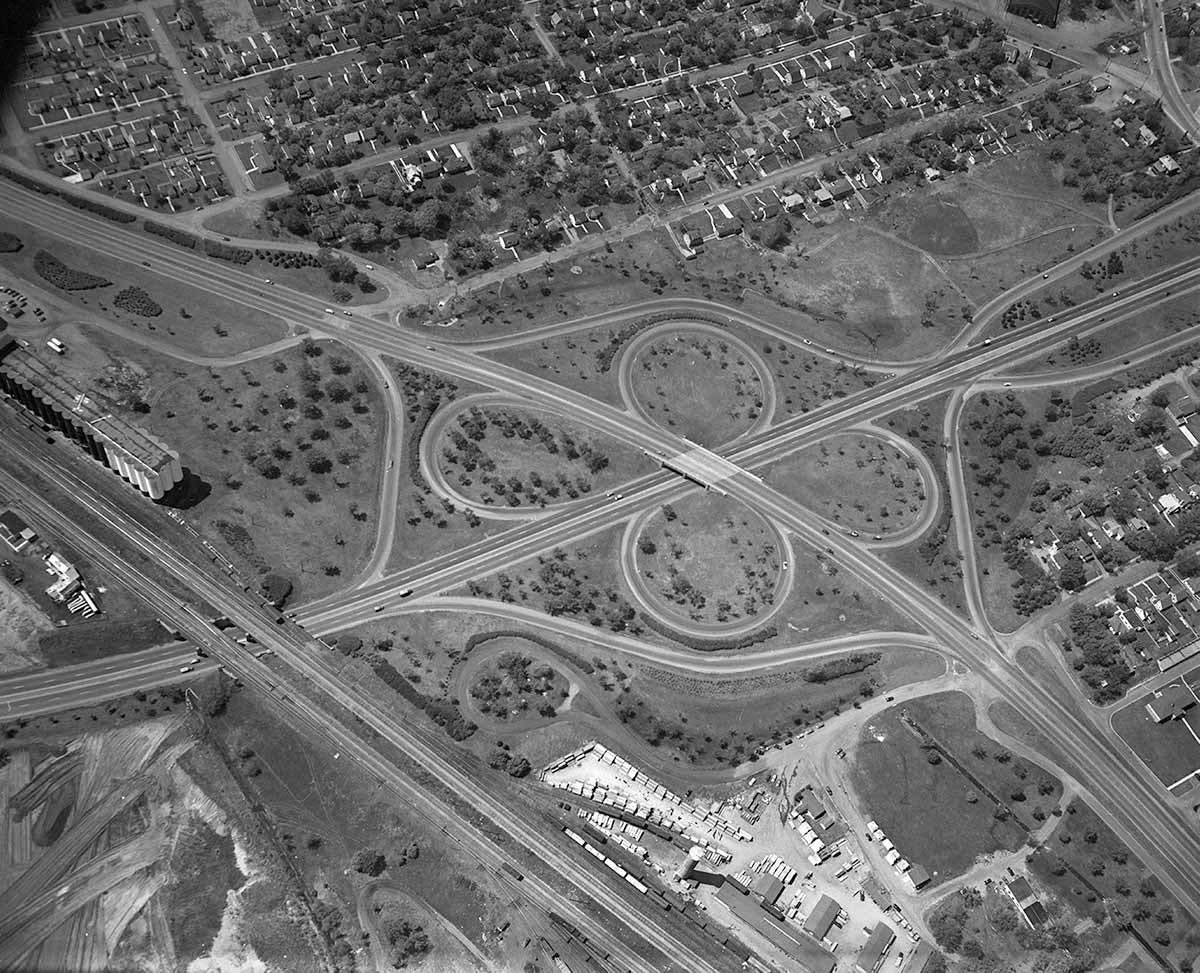